Our event with the Gewandhaus Children Choir, originally scheduled for 20 June 2020, will take place 25 June 2022, 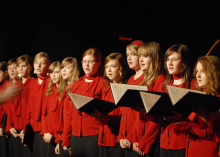 „Music ist the most beautiful creation of the human soul"

The words from the Theresienstadt Diary of Helga Pollak are the title and motto of our event scheduled for 25 June 2022 in Leipzig's Gewandhaus.

Texts and songs based on the Play "The Girls of Room 28“ by Hannelore Brenner.

Our cooperation dates back to the year 2005, when the Hans Krása's opera Brundibár was staged by this choir and the exhibition The Girls of Room 28 was on display at the Gewandhaus. On 22 January 2008 we invited the Choir to the opening of the exhibition in the German Parliament  and in the Academy of Arts (photo). In 2010 we took part in the choir’s German-Israel project Brundibár – a children’s opera bringing Germany and Israel together.