The Girls of Room 28

The experiences of a group of Jewish children who once lived in Room 28, Girls' Home L 410 in the Theresienstadt ghetto along with the songs they sang together are brought to life in this play. 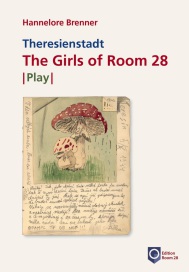 Thanks to Maris Lyons, Cardiff/Wales

who edited my translation.

120 pages, about 30 images/ documents by "The Girls of Room 28" and six paintings by Bedřich Fritta

This play is based on the true story of “The Girls of Room 28”, the Jewish girls who lived together in the Girls’ Home L410 in the Theresienstadt ghetto. It is the result of many conversations with survivors of this group mainly between the years 1996 and 2003, but also after.

I came across the story of these girls during my research for a radio-feature on the children’s opera Brundibár  - in the US, Czech Republic and Austria. In November 1996 I visited Anna Hanusová in Brno and Helga Kinsky in Vienna for the first time. (...)

From September 1998 we met every year in early autumn for several days in the Czech resort of Špindlerův Mlýn, in the Krkonoše Mountains. There, during our conversations while walking along the Elbe river or over the mountains, and during the workshops we held in order to bring together whatever available documents and memories the participants could contribute, I was both witness to and a participant in a work of remembrance that became more and more intense and vibrant with every meeting. A passage from Helga's diary, words from Flaška's scrap-book, a poem from Handa's notebook, a photograph, a child's drawing, a song – all of a sudden the past would come alive for the women, tangibly close even for me, the outsider, who was swept along by this stream of consciousness into the very centre of a story that would not let me go, even today.

Most of the scenes and dialogues woven into this play originate in these first annual meetings and from our many conversations. (...)

The importance of Music in Room 28

While writing, music kept sounding in my mind which, of course, is not surprising at all. Thanks to the caretaker Ella Pollak, whom the girls called Tella, music played an important role in Room 28. Tella was a passionate pianist and music teacher. With her protégés she founded a choir, and with three of the girls – Flaška, Ela and Maria – she formed a trio. Often the girls’ singing was heard outside and it is said that passers-by stopped to listen to their voices. (...)

Music also echoed in my heart whenever I read Handa’s wonderful poems that she jotted in her notebook, or when I imagined specific scenes. And then of course, there was Brundibár! This children’s opera by Hans Krása and Adolf Hoffmeister is an essential part of the story of these girls and the very reason that led me to them, and one of the reasons why I finally told their story. (...)

May this play, which I also see as a basis for a film-script, inspire many people and may the story of these girls continue to be told in the medium of theatre, music and film today, in all corners of the world, and long into the future.

The publication of the play closes a circle that began in November 1996 when I first visited Helga in Vienna.

In the introductory chapter of the book The Girls of Room 28, which was first published in 2004 by Droemer Publishing House, Munich, I described that moment:

"From the very beginning I had a vision - and this is thanks to Helga Pollak. In my mind one scene after the other was passing by like a film as she told me about her childhood and read from her wonderful diary. Without Helga's well-documented fate – a circumstance which is due to the fact that her father Otto Pollak also survived and was able to save her diary and his own calendar notes and other valuable documents from Theresienstadt – the present book would never have been written."

Nor would this play have come into being.

Thus, the play, the book and exhibition The Girls of Room 28, as well as Helga’s diary contain the most valuable part of the legacy of  the girls of Room 28 and of Helga the Theresienstadt Diary of  Helga Pollak-Kinsky,