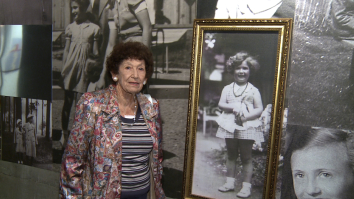 Vera Kreiner, née Nath - she belonged to the group of "Girls of Room 28" from the Theresienstadt ghetto - passed away on March 8, 2022. "She was surrounded by her loving family until her last moments," her daughter-in-law Avivit wrote me the same day.

It is difficult for me to write words of farewell to people who have grown close to my heart. Vera, along with Hanka Weingarten, Judith Rosenzweig, Handa Drori and Eva Zohar, are among the women who will forever be associated with my first trips to Israel in 1998 and 1999. At that time, I had no idea what was in store for me when I set out to meet other survivors of Room 28 in the L 410 Girls' Home Theresienstadt. And then this: Cordiality, openness, hospitality. I was received - and I owe this to Helga and Flaška - like a friend. Hanka was always my anchor point on all my trips to Israel, she organized my visits, drove me wherever I was expected, like to Vera who lived in Ramat Gan. The last time I was with her for three days was in December 2016. 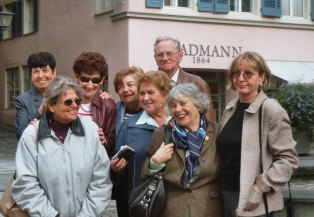 By then Vera had been living alone for several years, without her husband Micky, who had always accompanied her, when we met every September between 1998 and 2006 in Spindleruv Mlyn, or when we came together in the frame of the exhibition and the book "The Girls of Room 28" - in Schwerin (2004), Überlingen (2005) Berlin (2008 and 2009 and 2012) and in many other place

When I think of Vera, I always think of her husband Micky too. Fate forged the two of them firmly together - he, who had fought in the Slovak resistance, and she, who was born in Opava/Troppau in the Czechoslovak Republic on March 25, 1930, and arrived in the Theresienstadt ghetto with her parents and sister on July 8, 1943. There the family was liberated on May 8, 1945.

Vera had gathered documents from the Theresienstadt ghetto which she put together with some explanations in her precious album. It is Vera's  memory of the day of liberation on which the last passage of the book ""The Girls of Room 28" is based.

On May 8, 1945, cannon thunder was still in the air (of the Theresienstadt ghetto), almost all day. But then the tension was released. From the attic of the Dresden barracks, Vera Nath looked down on the streets: It was already late in the evening, after nine o'clock. Suddenly we saw a woman with a red flag! And we ran down, the ghetto barriers were open. The Red Army was coming. They were all still children, fifteen-, sixteen-year-old boys. We cheered, what could we do. For hours we stood outside and watched. Everyone was singing, the Internationale, German, Czech, Polish, Hungarian ... all mixed up."

The Red Army as liberators! How fundamentally our world has changed in the 77 years that have passed since then... Some things seem to repeat themselves  with frightening dynamics, albeit under different auspices, as it were according to archetypal patterns.

In 1868, Vera's paternal grandfather had fled the Russian tsarist empire for fear of being recalled to the military and in view of the pogroms against Russian Jews that flared up again and again. He had found a home in Troppau /Oppava, then part of the Habsburg Empire.

Seventy years later, in 1938, when Nazi Germany annexed the Sudetenland and then occupied the entire Czech lands, the descendants were again forced to flee, this time to the interior of the country. Brno, Moravian Ostrava, Prague were the stations before the family was deported to the Theresienstadt ghetto. There they narrowly escaped transport to Auschwitz-Birkenau twice and were liberated in Theresienstadt. In October 1948 Vera emigrated to Palestine.

Vera wanted to spare her children what became one of her most formative experiences: "It's a terrible thing. When friends you've just made suddenly disappear. And you don't know where they went. You never hear from them again." That's why, when Vera had children of her own, it was important for her to stay in one place. "I wanted my children to never be torn from their familiar surroundings." Vera succeeded. - But unfortunately, what she experienced as a child, millions of people experience today.

Today, in March 2022, some buildings of the former Terezin ghetto in which youth groups were housed in recent years, provide refuge for people who have fled the Ukraine.

It is a comfort to know that Vera had a good life in her "second life" in Israel, with her husband Micky and their children; a life that took them to many countries. Vera and Micky were passionate about traveling.

And so Vera was the only one from the circle of "Girls of Room 28" who flew with me to Brazil in May 2014 for the opening of the exhibition "As Meninas do Quarto 28" on May 22 at the Mube Museum in São Paulo.

This trip brought us even closer together. And in the last yeears, our conversations resonated with the memory of our unique experiences in Brazil. She was grateful to be able to witness how the memory of "The Girls of Room 28" miraculously found an echo in Brazil. And I am grateful for the beautiful images of Vera that live on in my imagination; also in my heart. Rest in peace, dear Vera. 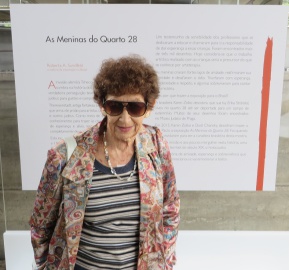 Vera in Brazil. Opening of the exhibition "As Meninas do Quarto 28" in Sao Paulo, 2014