Story: The Girls of Room 28 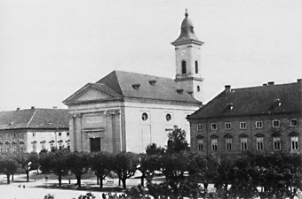 Girls Home L 410, building right of the church. In the upper floor was Room 28.

The Girls of Room 28 – this is the story of a group of Jewish children sent from Nazi-occupied Czechoslovakia to Theresienstadt concentration camp during WWII. They were among the 75,666 Jews from what was termed the ‘Protectorate of Bohemia and Moravia’, who lost their homes, their property and their freedom when German troops marched into their country and were eventually deported to Theresienstadt, a small fortress town near Prague. There, in Room 28 of the Girls’ Home L 410, their paths crossed.

In the care of adults who were prisoners like themselves, these girls spent, for some time between 1942 and 1944, their nights and days together in the closest of quarters – thirty girls in a small room of about 325 square feet. They slept on narrow triple bunks, ate their meagre rations together and, when evening fell, listened as their counsellor read to them. Once the lights were out they would talk about their experiences, share their thoughts and dreams, their worries and their fears.

While thousands of older Theresienstadt inmates suffered increasing physical deprivation and severe psychological stress and more than 33,300 people died at Theresienstadt, these children were protected as best as possible by a group of adults – educators, teachers, artist, Zionists – people who were determined to teach and educate them and to prepare them for a better future.

Time and again, girls from their room would suddenly be torn from their midst and forced to join one of the dreaded transports to the East. New girls would arrive, new friendships would grow – only to be torn asunder again by the next transports.

And yet, in spite of the fear, there were times when the girls experienced Room 28 as an island of friendship and hope. They had classes, played, sang or had drawing lessons with the unforgettable artist Friedl Dicker-Brandeis.

When rehearsals for the children’s opera Brundibár began in July 1943, some of the girls of Room 28 were among the cast: Ela Stein played the cat, Maria Mühlstein very often the sparrow. Anna, Handa and some of their friends sang in the choir. And all  of them knew the songs of Brundibár by heart.

Brundibár pannel of the exhibition.

There is more information on this aspect of the story:

In their cramped quarters of Room 28 and under the increasing pressure of the events, these girls grew together as a community. They gave themselves a motto, created a hymn and a flag and founded their little society ‘Ma’agal’, a Hebrew word meaning ‘circle’ and, in a metaphorical sense, ‘perfection’: for this was their goal.

The destination of the transports that took away so many of them was Auschwitz-Birkenau. Most of the girls, and with them more than 14,000 children, were murdered there. 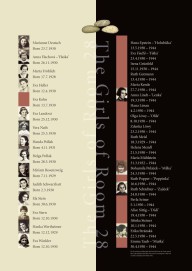 The book and the exhibition are "Stones of Remembrance". They also pay tribute to people who became, like Friedl Dicker-Brandeis, important for the children in the Theresienstadt Ghetto. 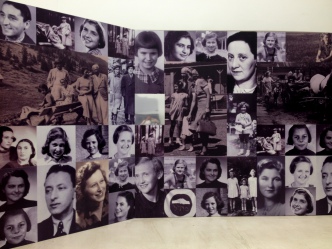 Collage. Element of the Brazilian version of the exhibition.