The Girls of Room 28

The exhibition The Girls of Room 28, L 410 Theresienstadt has been created in 2004 in Germany to fulfill the wish of survivors to remember the girls who once lived with them in Room 28 in the Theresienstadt ghetto and were murdered in the Holocaust. They also wished to honour those adults in the ghetto who took care of them and passed on their knowledge, humanity and hope for a better future. 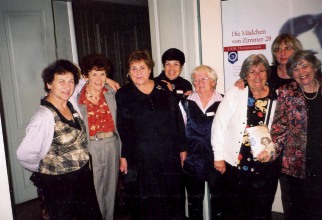 Opening of the exhibition in Schwerin, Germany, 23 September 2004

The exhibition illustrates the story of 'The Girls of Room 28' using original documents - a diary, a scrapbook, notebooks, poems, letters, essays, photos, drawings - echoes of young lives, traces of lives lost as well as from those who survived. It has been created to give space to the original documents. The exhibition became a touring exhibition. In 2008 a reconstruction of Room 28 was added to the exhibtion for display in the German Parliament. Until today the exhibition was shown in more than 60 places in Germany and in many more places abroad.

Venues of the Exhibiton

A Czech, French and an English version was created. In 2014 a newly designed Brazilian exhibition came to life. Helga Pollak-Kinsky with her daughter Eva

Opening of the Czech version in the Educational  and Culture Centre in Brno, which is part of the Jewish Museum Prague. Since then it is touring in the Czech Republic and has been shown all over the country. Opening of the French version of the exhibition in the Musée d'Histoire, as part of the EU funded festival Music Interdites. It was also shown in Toulouse. First time on display: The English version of the exhibition during our event in the Enav Centre. Exhibitions followed in Great Britain, Brussels (European Commission 2013) and Geneva (United Nations 2014) an in 2019 in Cardiff (Welsh National Opera House/Millennium Centre). In 2014 a newly designed exhib8tion came to life in Brazil thanks to Karen Zolko (photo). It became a touring exhibition and a huge success.

As Meninas do Quarto 28