Exhibition. The Girls of Room 28

A EUROPEAN Project by

Excerpt of the Project Description

On 23 September 2023 it will be exactly 80 years ago that the children's opera Brundibár was performed for the first time by children in the Theresienstadt ghetto. By then at the latest, we want to perform this opera by Hans Krása (music) and Adolf Hoffmeister (libretto) together with children from different nations, especially Ukrainian children, in connection with the story of "The Girls of Room 28". (...)

When Brundibár was performed between 1942 and 1944 over fifty times in the Theresienstadt concentration camp, played by children for children, it gave the young ghetto inmates hope of victory over Hitler. It also became a symbol of good over evil. The autumn transports of 1944, in which over 18,000 people, including almost the entire Brundibár ensemble, were deported to Auschwitz-Birkenau, silenced the most popular theatre-production in the Theresienstadt ghetto.

More than a distant memory 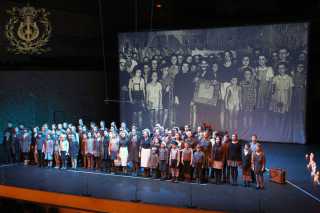 Today in Europe we are again experiencing the horrors of war. We are becoming aware that peace cannot be taken for granted; that a country under military attack and whose existence is fundamentally threatened must have the capacity to defend itself and is dependent on the solidarity of other states. In view of the Russian war of aggression on Ukraine, opera director Mstislav Pentkovsky, who has been staging Brundibár on major stages in Russia since 2015, became aware that the opera - understood worldwide as a symbol of solidarity and humanity - was suddenly in danger of being politically instrumentalized and misused as a projection screen for the enemy image of the "evil Germans".

"Considering that the Holocaust is an exceptional event in human history (...) remembrance of the Holocaust has the paramount importance for the purposes of preventing crimes against humanity. Younger generations should know about these atrocities and should never witness their recurrence.  (...)

The painful memory of World War II is more than a distant memory. It has found an echo in Russia's illegal and unjustified war against Ukraine. The impact of the war on Ukrainian children is taking on terrifying proportions. Ukrainian children are being killed, wounded, and deeply traumatized by extreme violence in the war. Thousands of children are being displaced, many are illegally taken to Russia to be nationalized against their will.”

Brundibár is more than a sounding memorial to the children of Theresienstadt. The message of the opera is not exclusively: Remember what happened to the Jewish children in the Holocaust. It also means: Stand together in solidarity, only in this way can we overcome evil. It is important that the power of the children's opera also benefits today's children. It is important to do justice to the work and its creators. (...)

It is close to our hearts to pass on the messages inherent in the children's opera Brundibár and the story of The Girls of Room 28 to younger generations of all nations in the interest of a more peaceful world and in a spirit of solidarity. It is close to our hearts to realize a production in which Ukrainian children also play and sing along and in which they also get to know the opera and its story.

We also want to motivate Ukrainian children to tell us their story. A supporting program is planned around the performance of Brundibár, which will be developed in dialogue with those who are willing to realize this project with us.

Our project Brundibár. Children Against War is a sign of solidarity with the Ukrainian people and a project in memory and honor of the victims of the Holocaust.

Should you be interested, we gladly provide you with further information.

You can write to Mstislav Pentkovsky

More about myself you can find here: