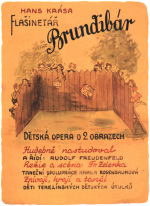 Brundibár and the Girls of Room 28 - these are two stories closely intertwined: Brundibár, the children opera by Hans Krása and Adolf Hoffmeister created in 1938 in Prague and staged by Jewish children in Prague in 1942 and, between 1943 and 1944 in Theresienstadt, has become a memorial to the children of Theresienstadt who were murdered in Auschwitz. 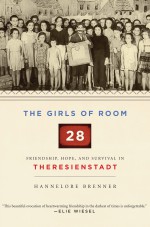 The survivors from Room 28 bear the memories of these children, the memory of Hans Krasá and of all who played in the opera or were among the audience.

When in July 1943 rehearsals for the opera began, girls of Room 28 were among them. Ela Stein (now Weissberger) played the cat, Maria Mühlstein often the sparrow and several times she played Pepicek's sister Aninka, on the side of her brother Eli. Handa Pollak (now Drori) played sometimes the dog and Anna Flachová (later Hanusová)  sang in the choir of the school kids, and once she even played Aninka. All of the girls knew the opera by heart, and songs from Brundibár were often heard in Room 28. 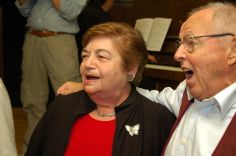 Ela Weissberger, who played the cat in Brundibár, recalls how she danced to a Brundibár melody in the rhythm of a valtze, while Paul Aron Sandfort played the trumpet.

The survivors of Room 28 and their story as told in the book and exhibition had a strong impact on the reception of the opera and contributed to its revival. Many activities, projects, productions, works were inspired by their story. 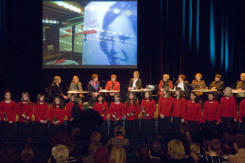 The Leipzig Gewandhaus Children's Choir and "The Girls of Room 28" in the Academy of Arts, Berlin. 22  January 2008. 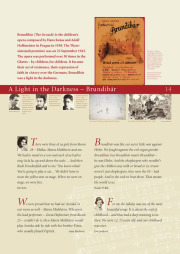 Panel of our exhibition

Today, in 2018,  the  circle of survivors who had witnessed or taken part in the opera has become small.

The book and the exhibition are "Stones of Remembrance". They keep alive the experiences  and memories of "The Girls of Room 28", also the memories of an opera that has become "a light in the darkness" for the children in Theresienstadt.

Brundibár and the Children of Theresienstadt 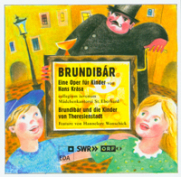 2. Radio documentary about the history of its first performances in Prague and Terezin by Hannelore Brenner.

The CD is still available.

In 1998 the label EDA published the radio documentary by Hannelore Brenner which was produced by the Austrian Radio a year before. (Another production was done in 1997 by "Sender Freies Bherlin".)  It tells the history of the creation and performances of the opera along original documents and recollections of the survivors:

The radio-documentary is in German. 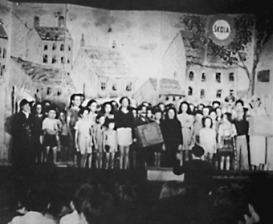 Stills from the propagandafilm. Children singing the Finale of Brundibár.